Welcome to the second installment of my three-part series on how I gained 5,000 Twitter followers in less than six months. Last week, I offered advice on setting up an attractive profile people will want to follow. There are just a few more things you’ll want to do before you begin gathering those hordes of followers. Once again, unless you’re brand new to Twitter, you’ll already have completed some of these steps, but perhaps you’ll still find a useful idea or two.

Step 2—Get Your Feet Wet

It’s a good idea not to dive in too quickly. You need time to become familiar with Twitter etiquette and conventions, and you don’t want your ratio of Following to Followers to get too far out of whack. If people see that you’ve followed five hundred people and only fifteen have followed you back, they’ll shy away, thinking you’re a spammer. So for the first month or two, you’ll want to start slowly.

Follow your friends. The obvious place to start is with the people you already know. Very few of my personal friends are on Twitter, but most of the writers I know are. It can be tricky to search for people on Twitter, so you should get their Twitter handles if you can. If you belong to a writers’ group, they may have a list available. Post on Facebook, in Yahoo groups, etc. asking your friends for their handles and announcing yours. You can also scan through the Following/Followers lists of your friends looking for familiar names and faces.

Follow your groups. If you belong to writers’ groups, follow those next. You may find some friends you’ve missed that way, and the group may even help promote you with shout outs or Follow Friday posts.

Set up lists. This is the most important part of Step 2. You’re about to gather thousands of followers, and you better be ready! You can’t possibly keep up with all those tweets, so anyone whose tweets you don’t want to miss—friends, agents, celebrities, etc. -–need to be on a list. Preferably several, divided by category. Trying to set up these lists after the fact can be frustrating and time consuming, so it’s best to have the framework in place before your followers become overwhelming. Add important people to the proper lists as you follow them, and you’ll be ahead of the game. I have several lists, some of which are small enough for me to read every tweet, and others that I only scan from time to time. Combined, they let me stay connected without drowning in the endless sea of tweets. 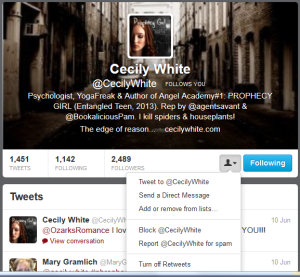 Some people love HootSuite or other third party apps for organizing their Twitter followers. Personally, I’ve been satisfied with the list feature within Twitter, so I haven’t experimented elsewhere. Setting up lists is easy. Click on the name of the person you want to add. Beneath their bio, you will see a head-and-shoulders icon with an arrow. Click on that icon, and you will get a menu that includes “Add or remove from lists . . .” Now simply click the list you want to add that person to, or click “Create a list” to add a new category. Easy peasy.

Once you’ve gathered a base of followers from your friends and colleagues and set up lists to organize all those tweets, you’re ready to begin adding serious numbers. Come back next week for Step 3—Time to Fly.

Conquering the world, one manuscript page (or one dirty diaper) at a time.