I recently had an incredible experience—guiding my six-year-old as he wrote his first story. I abandoned my Ph.D. track partially because my time as a T.A. in World History 101 convinced me I despised teaching, but helping my child discover the joy of storytelling was truly amazing. And a lot of hard work, for both of us. 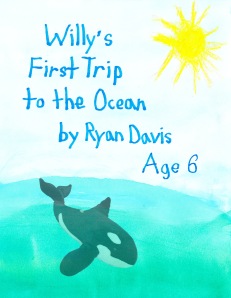 This journey began when I saw a post about the PBS Kids Writers Contest. I just knew my precocious kindergartner would latch onto a project like that, and he did. I took dictation as he spun an imaginative tale about his stuffed orca coming to life as a real whale. In no time, he had a complete story—or so he thought. But as every writer knows, that’s just the beginning.

The first thing I taught him was the concept of the first draft and that every story you read has been through several rounds of editing and rewriting. His face fell, but he wanted this story to be good. We used worksheets from the PBS website to break down his story structure. His story naturally had a good beginning, middle and end, but the worksheets helped him find ways to strengthen the final problem and resolution for a more satisfying ending.

He still wasn’t done, though. His story was now over 500 words, and the contest limit was 200. That meant he had to do a lot of cutting. We went through every sentence, talking about whether that sentence contributed to the story he’d outlined on the worksheets. He especially hated cutting the paragraph about his little brother’s stuffed seal, but he recognized that it wasn’t really part of the story. We searched for anything that was unnecessary or repetitive until the story was finally under the limit.

There was still plenty of work to do since the contest called for illustrations and Mean Mommy made him write his story out by hand (not required for the contest, but I wanted him to practice his handwriting), but for this post I want to focus on just the writing process. What really struck me was how similar this was to the way I craft a story. Whether it’s a full-length novel or a 200-word children’s story, many of the ideas and processes remain the same.

My child and I both invested many hours in this project, but it was time well spent. It was wonderful sharing something I love with my child. I ordered a hardcover version of his story for myself, and I’m going to treasure that book—and the memories of the time we spent together—forever. Oh, and in case you’re wondering, his entry took first place in the kindergarten category for our region and also received an honorable mention (second place) in another contest for 6-11-year-olds sponsored by the Springfield-Greene County Library. I can’t wait to see what he writes next!

33 thoughts on “The Joy of Teaching”

Conquering the world, one manuscript page (or one dirty diaper) at a time.